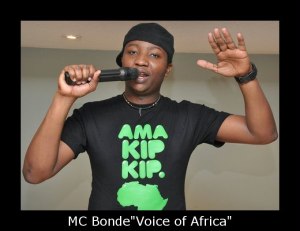 Mc Bonde “THE Voice of Africa” is a Toronto resident by way of Zimbabwe. Mc Bonde is not only an Mc but his the co-founder of Zonetradio an online radio. Bonde is currently gracing our local networks here, he told me his in the works to broadcast his shows online till then you can always listen to him on his radio show or if lucky like me you get to see him performing live! Bonde never dissapoints makes it a point to make sure you are always on your feet.

I asked Mc Bonde when all this started?

Bonde:I started MC’ing in toronto canada in 2005 after being a DJ since 1995 in Zimbabwe and here in Toronto as well. Becoz of my loud voice, MC’ing was the better gig for me as I was doing something different and something that a lot of pple either can’t do or will not do…that is acting crazy in front of a crowd. Being an MC has opened more doors for me, including a radio show on chry 105.5fm every Tuesday morning (10am to 12noon), a TV show on AMET-TV every Saturday (7pm to 8pm) on Rogers Channel 122 / Bell Channel 207 and also MC’ing weddings all over North America and recently a weddings in Johannesburg, South Africa and Washington, DC.

Sent from my BlackBerry device on the Rogers Wireless Network

One thought on “The future is here!!”

Posts from the Past